“What? It only has one toilet?”

The house buyer turns away, shaking her head, “We must have 2 toilets at least.”

Yes, in Australia we all expect to have a couple of toilets per house, along with a few television screens. That’s become the norm. But it wasn’t always like that.

Let’s take a short walk into the past.

The Early Days with the Flush Toilet

The flush toilet has been with us for 421 years. It was designed by an Englishman Sir John Harrington. After building a trial model in his home he published his plans in 1596.

His design had a tank of water a floor above the WC. A valve was opened and this torrent of water came down and flushed through the toilet.

Houses did not have internal plumbing at this time. This meant that water had to be carried upstairs to fill the tank. Then once the flushing was done, the urine, faeces and water went into a holding tank.

And guess what? Some lucky servant had to clean it out regularly. 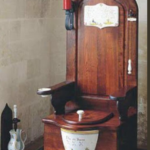 Sir John was well-connected. He was a godson of Queen Elizabeth 1st. And so he installed one of his new toilets for her at Richmond Palace on the outskirts of London.

The next major advance for toilets came nearly 200 years later.

Who Invented the Dual Flush Toilet?

Like the famous Hills Hoist clothes line, the dual flush toilet was an Aussie invention.

It started because of a problem…

Australia has always been a dry continent and in 1979 the Eastern states of Australia suffered from major droughts. Water supplies and dams dried up. Livestock and native animals died in the severe heat waves. Water conservation became a hot topic. Sydney introduced water restrictions as the dam levels dropped.

Pouring litres of drinking water down the loo just didn’t make sense. Something had to change.

Then along came the dual flush toilet. It was designed by Bruce Thompson who was working at the Australian plumbing company Caroma in 1980.

Originally the toilet used 11 litres of water on full flush and 5.5 litres on a half-flush. Over time there have been many design improvements. The latest models use only 4.5 litres and 3 litres of water.

Now 35 years on, the dual flush toilet has become the norm in Australia. In fact the law states that all new toilets must be dual flush. And the Australian innovation has taken hold overseas.

Dual flush toilets are now exported to over 30 countries including Singapore, New Zealand and Israel. Many European nations concerned about unpredictable rainfall and water conservation are also introducing the Aussie loo.

Meanwhile, across the world, having a toilet is not something to take for granted.

Here’s what I mean…

More people have access to mobile phones than toilets.  Bizarre, isn’t it?

13% of the world’s population do not have toilets or even pit-type latrines. Instead these 946 million people must do their business behind trees and bushes and in other open areas (Source: World Health Organisation).

Most of these people live in rural areas where there is no town sewerage system. It’s a familiar story – services are just better in the cities.

Across the world, diarrhoea disease is the second leading cause of death among children under 5. These deaths can be prevented if poor communities have clean water supplies and toilets.

In fact, the simple toilet is so important to world health and disease prevention that the United Nations started World Toilet Day in 2013. It’s a few months way yet, on 19th November. How will you celebrate?

PS If you have a plumbing topic that you want me to cover, let me know.